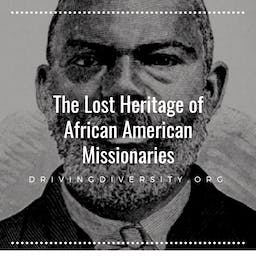 Did you know that the first person to leave the U.S. and plant a church in another country was Black? Even though the Southern Baptist Convention has failed to recognize George Liele as the first overseas missionary from the U.S. because he was not “sent out” like Adoniram Judson who went to Burma thirty years later, many acknowledge him as such. Liele is just one of the many forgotten names of African American missionaries.

In campus missions, we often talk about the Christian heritage of the university. Most of our educational institutions were started for the training of missionaries and pastors. Even though our campuses are far from that today, university missionaries work to see God’s original vision for these strategic places fulfilled. We also believe the heritage of George Liele and others like him should not be forgotten, but instead, should be built upon for the greatest mobilization of people of color the world has ever seen.

Today less than one percent of the 118,000 U.S. missionaries are African American. This should not be! Our Father is calling our African American brothers and sisters into the harvest field, and it is our job as Christian leaders to make straight paths for them. While the task may seem impossible in light of the cultural and economic obstacles most African Americans face trying to enter missions, we must step out in faith, do what we can, and trust God for the rest.

So we must grow our faith by remembering people of faith. We need to educate our congregations regarding the history of African American missions, making names like George Liele and David George as well known as Fredrick Douglas and Martin Luther King. We need to teach about needs beyond our local community and help give our people a global vision. It takes the whole body to do the whole work, and they need to know they are part of the body!

Most importantly, we need to make sure we are including the call to missions as part of the calls we issue to those in our flock. Morgan Smith, Chi Alpha missionary to Tulane University in New Orleans, told me, “I went on a missions trip while in high school and totally fell in love with missions, but I dismissed the idea that I myself could be a missionary. I had never seen anyone in missions that looked like me.” It wasn’t until her campus leader personally challenged her that she realized God could use her too. Another one of our missionaries, Raydon Haskins, a native of Gary, Indiana, puts it this way, “You can’t answer a call you haven’t heard.”

Lastly, we need to personally work at helping those God calls to get to the mission field. We need to take the strong community elements in the African American culture and translate it into a mission’s partnership. Like the church at Antioch that sent out Barnabas and Paul, we need to become sending churches. As we teach our people to give to missions, we will give them the opportunity to partner with Jesus himself in the global mission of reaching the world.

The world has become a very diverse place, yet our missionary force is almost the complete opposite. In Chi Alpha we recognize the strength each ethnic and racial group brings to the table and desire that our missionary teams be as multi-ethnic as the places they serve.  Currently, over five percent of our staff is African American and less than 85 percent Caucasian. Still, we have a long way to go. Will you partner with us in the vision of seeing every nation, tribe, people, and language not just reached but mobilized? Together we can see a whole new generation of George Lieles serving all around the world.