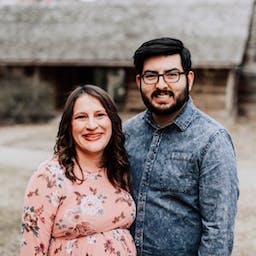 As a new freshman walking across the Sam Houston State University campus, someone invited Joe Sedillo to play Capture the Flag. During the game, he was invited to Chi Alpha where he soon became involved with his first group of Christian brothers. It wasn’t until he attended a Discover the Nations conference that Joe began to feel a deep burden to disciple students from the nations and a call toward campus ministry.

By receiving help from the Minority Mobilization Fund (MMF), Joe was able to complete his first year of the internship in a financially healthy place. The growth he experienced that year set him on a path toward a lifetime of campus ministry. Now after four years on staff at Sam Houston State, Joe and his wife Nicole are preparing for their next adventure.

Along with their newborn daughter Quinn, the Sedillos are leading a Chi Alpha planting team to Buffalo State in New York. They plan to start in January 2019 and their team will be one of the first Chi Alpha plants in the Empire State, home to almost one million college students.

It’s hard to think of a better investment of resources than in people like Joe who are taking the gospel to uncharted campuses around the country. Our MMF dollars have an immediate and eternal impact by equipping and sending minority laborers for the Kingdom of God. Thank you for making the MMF possible and joining in the pledge drive this month!

To find out more about the MMF and become a partner, go to chialpha.com/mmf.