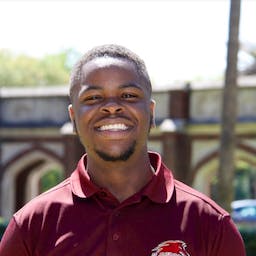 As a freshman at Loyola University in New Orleans, Joshua Byrd spotted a flyer advertising a worship gathering at the front of the school. Hoping to make friends, he attended and soon became part of Chi Alpha. Although as a student he felt God calling him to campus ministry and a burden to see students shaped by the love of God, he wasn’t sure what a career in campus missions would actually look like.

When it came time for graduation, Joshua received two different job offers from former companies where he had interned. Instead, he chose to become a Campus Missionary-in-Training (CMIT) to be trained in campus missions.

During his internship year, Joshua was one of the first ever recipients of an anchor level support grant from the Minority Mobilization Fund (MMF). He credits his anchor level support as a significant financial help, allowing him in part to be able to raise his support and pay his bills each month.

What started off as one year of missions turned into two. Now each week, he disciples men on his campus and equips students to lead worship. Throughout the year, he instructs student leaders and shares in preaching duties. Recently, Joshua made an incredible five-year commitment to campus missions at Loyola. This fall, he will be transitioning into the director role of Chi Alpha at Loyola, the same school where he started as a freshman years ago.

The initial investment made by MMF donors into Joshua’s first year of ministry is continuing to pay dividends for years to come. Thank you, Chi Alpha Nation, for believing in this strategic effort to raise up laborers from all different people’s groups.

To find out more about the MMF and become a partner, go to chialpha.com/mmf.